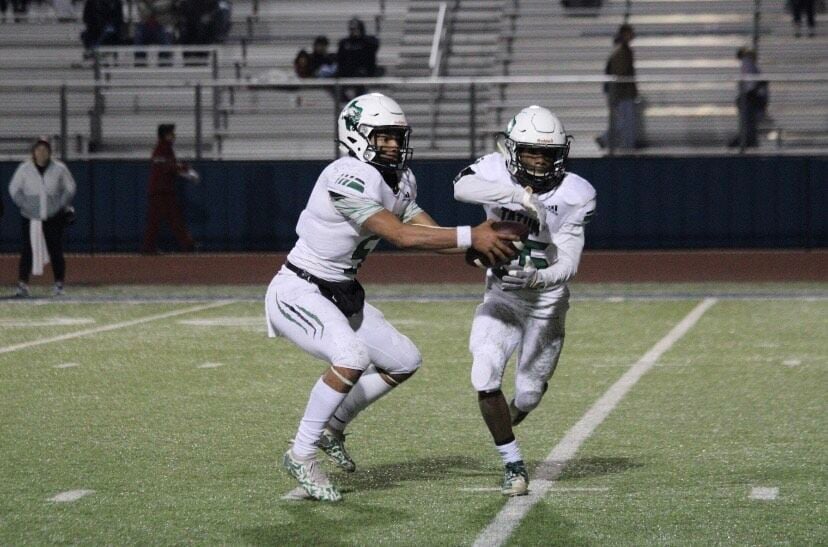 Quarterback Kendrick Malone hands off the ball to a runningback who then attempted to bulldoze through the Pottsboro defense on Friday night. 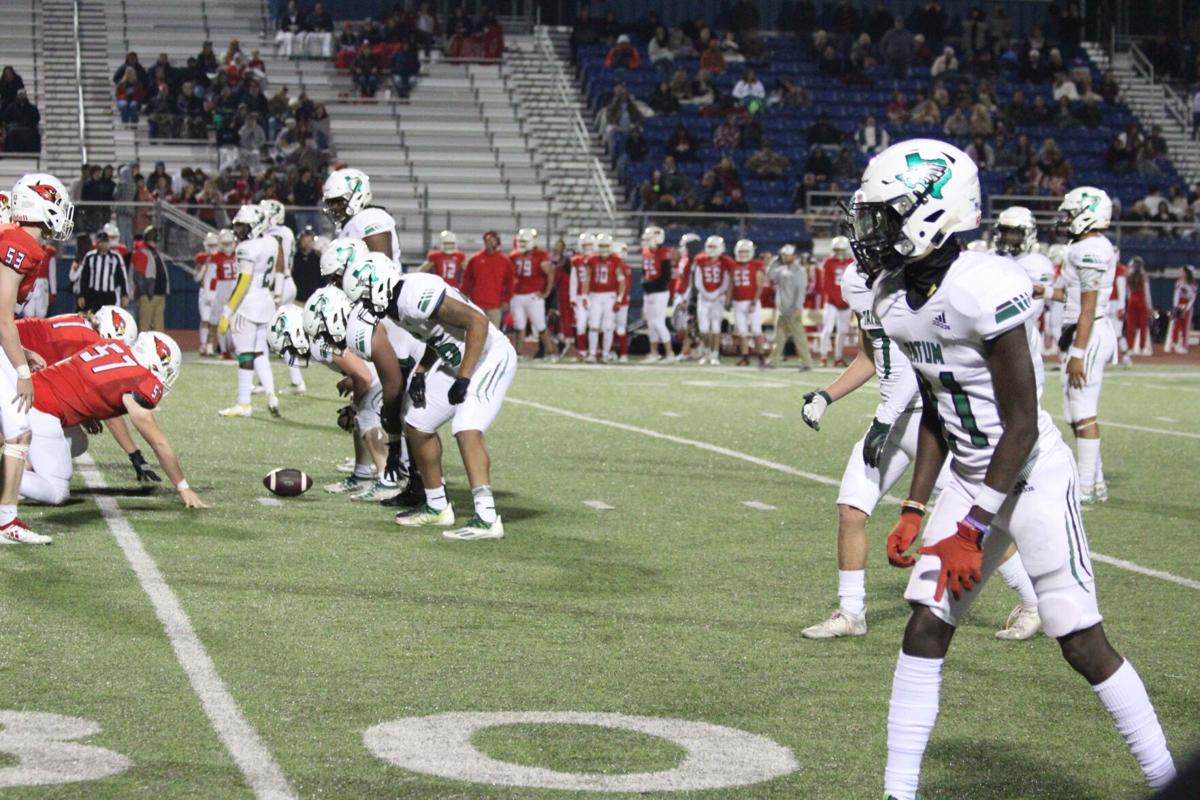 The Tatum Eagles’ defensive line keeps a careful eye on the ball as the Pottsboro quarterback decides which play to make.

Quarterback Kendrick Malone hands off the ball to a runningback who then attempted to bulldoze through the Pottsboro defense on Friday night.

The Tatum Eagles’ defensive line keeps a careful eye on the ball as the Pottsboro quarterback decides which play to make.

EMORY — The Tatum Eagles 2021 football season came crashing to earth Friday night. The Eagles lost to the Pottsboro Cardinals 56-55 in Overtime in the Class 3A Division I Region II bi-district round at Wildcat Stadium.

The Eagles had rallied in the fourth to tie the score in regulation. With the first OT possession, the Cardinals(6-4) backup quarterback Halen Flanagan scored on a 1-yard run and Connor McDonald converted to give the Cardinals a 56-49 lead. Tatum (8-3) answered with a 5-yard run by QB Kendric Malone, but the Jose Ventura PAT sailed wide and it was over. Ventura had been perfect for the night.

For Eagles HC and AD Jason Holman, it was a tough loss. “The toughest loss I’ve ever endured was a playoff game when I was at Jersey Village in Houston where we had the ball inside the 10-yard line going in for the win and the QB inadvertently spiked the ball to kill the clock on 4th down thinking it was 3rd down,” he stated. “This one ranks right up there with that. What a terrible way to lose a game… Of course, as I told Jose afterward, there were 40 other plays that should have been made throughout the game that would have prevented it from coming down to that play,” he added.

Did he consider going for two? “I briefly thought about going for two, but I didn’t think they would be able to stop us in the 2nd OT, and by rule, we would have had to go for two from that point on. Unfortunately, we never found out,” he stated.

It was some of those 40 other plays that keep coaches awake at night. Tatum suffered a pass interception that quickly became a pick-six and also lost a fumble that gave the Cardinals great field position and led to a score. In addition, the Eagles had a first and goal at the Cardinals’ six and came away with no points.

If you are a fan of great defense, this game was not your cup of tea. There were multiple lead changes. The teams exchanged scores in the opening quarter.

The Cardinals got on the board in the first minute of play as QB Jett Carroll found Major McBride from 75 yards out for the score. The PAT was blocked. Tatum would answer with Malone going 34 for the score. With the PAT, Tatum led 7-6 and the game was less than two minutes old.

Cardinal Cooper Townsley picked a Malone pass and took it to the house from 33 at the 4:38 mark of the first. McDonald converted. Starting at their 45 on the next possession, Eagle Kendall Williams would dash for 24 and Malone would find WR Jayden Boyd for 15. Malone would then have carries of six, five, and four before going the last yard for the score. With the Ventura PAT, the Eagles led 14-13 after one.

Pottsboro would go up by six in the early moments of the second with McBride again scoring, this time on a 12-yard run. Malone would again hook up with Boyd who scored from 51. Tatum edged back on top with the PAT, 21-20. Pottsboro ran out of downs giving the ball back to Tatum at the 49. Malone connected with Boyd for 37 and then scored with runs of four and ten. Tatum 28-20. The Cardinals would add two scores in the final 45 seconds before halftime on a long drive of 64 yards and a shorter one capitalizing on an Eagle fumble at the Tatum 38. At the half, the Cardinals led 35-28.

Tatum took the third-quarter kickoff and methodically marched to the six where three pass plays and a run netted zero yards. A big swing because Pottsboro would up the lead 42-28 on their next possession. The two teams would then trade scores but the Eagles still trailed 49-35 after three.

Tatum’s three losses this season were all by one point — including a 28-27 setback last week to Sabine and a 29-28 loss to Gladewater back on Sept. 24.

“We had a good season with some disappointments along the way,” stated Holman. “We endured some key injuries to our starters and managed to overcome it. Yes, all the one-point losses stink and don’t really provide much consolation because we did lose. But, I do think it speaks volumes about our kids; they don’t quit, they continue to fight, and when you come to play Tatum you had better expect a battle! I told the kids at halftime to lay it all on the line for 24 minutes and not to leave the field with regret. They did that, and I am very proud of the fight we exhibited!” he continued.

“As you know, this senior class was special. I wish we could have carried it on further for their sakes, but that’s how the ole ball bounces sometimes. This class of seniors will be deeply missed,” he concluded.