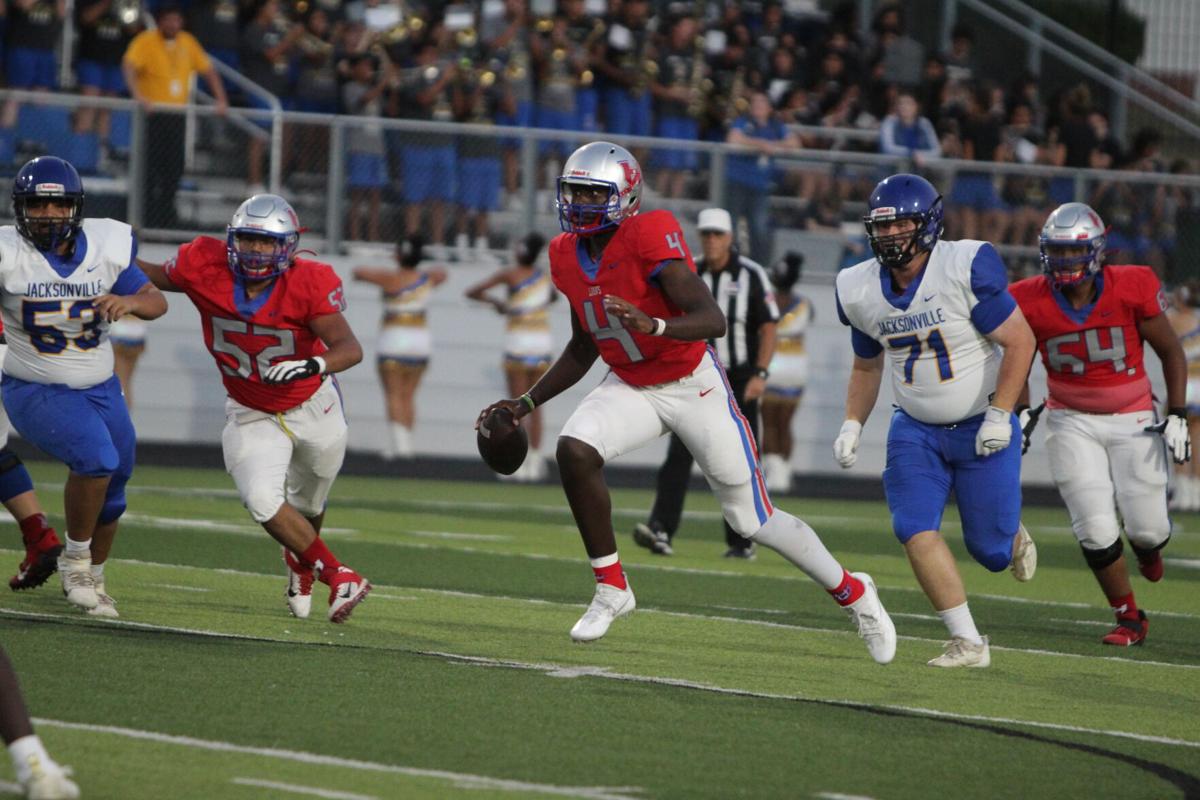 Quarterback Jacobe Robinson (4) goes for an opening as he weaves through the Jacksonville Indian’s defense in the first quarter. 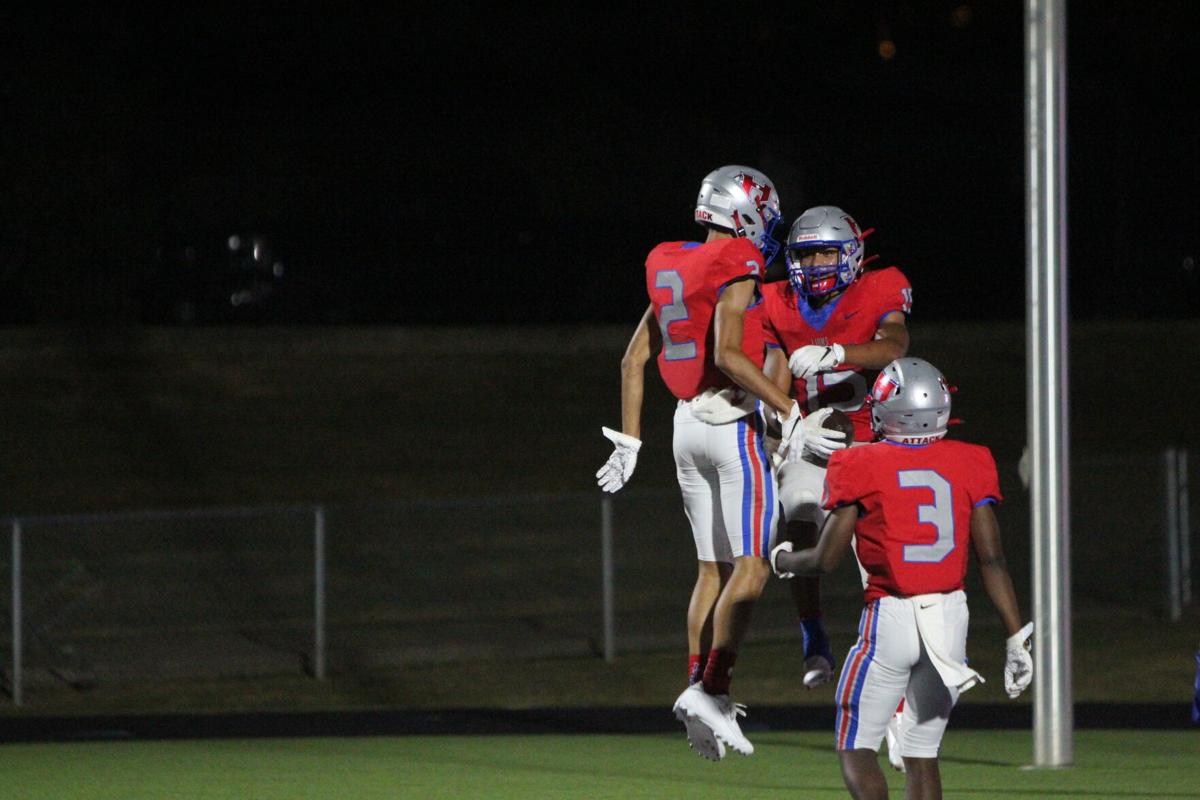 Quarterback Jacobe Robinson (4) goes for an opening as he weaves through the Jacksonville Indian’s defense in the first quarter.

The Henderson Lions outmatched the Jacksonville Indians 21-6 Friday night as they faced off at the Lions Stadium. This win bumps the Lions up to 2-1. Keeping a tight leash on the Indians’ quarterback was crucial in the Lions’ victory.

“Tonight was a much better effort [than last week],” Lions head coach Othell Robinson said. “We cleaned up some things. We have to improve on the mental side; we get too emotional. We stay in a negative play for about four seconds, a positive we stay maybe 10 seconds. And we can’t because you got to move on to the next play.”

The Lions, represented by defensive backs Cordarius Grange, Tobius Jackson, Daylon Garrett, and linebacker Nick Owen, won the coin toss and opted to receive. Thanks to wide receiver Devin Phillips, they started on offense at the 40-yard line.

The first play did not gain much, but by the next play, quarterback Jacobe Robinson had gained significant yardage for his team. A 15-yard face mask penalty on Jacksonville helped the Lions inch closer to their endzone.

Robinson handed off the ball to running back Ya’corus Porter in the next play, and Porter broke through a hole in the Indians’ defense to bring the team to the red zone.

Porter is handed the ball again; however, a tackle from Jacksonville drags him down, and the ball slips out of his hands. Jacksonville recovers the fumble, and wide receiver Dashawn Jackson is quick to bring him down.

The Indians’ offense was just enough to keep them on the field. Grange and running back Dallas Alexander teamed up to tackle their running back, and the ball rolled onto the gridiron. After a battle to recover the fumble, Henderson linebacker Cole Seider came out victorious, putting the Lions back on offense.

A five-yard penalty for a false start pushed the Lions back to the 16-yard line. However, this did not hinder them, as they stepped toward the endzone with each play.

The second quarter was the perfect storm for the Lions. On offense, a handoff to Porter brings the Lions inside the 10-yard line. In the next play, Porter pushed through the Indians’ defense and scored a touchdown. Kicker Julian Garza earns the team an extra point with a successful conversion.

Garrett gets the Jacksonville offense off the field with an interception, starting the Lions at the 42-yard line. Henderson quickly makes it to the 5-yard line, and Robinson starts the play by handing off the ball to Tobiaus. Tobiaus pushes through the Indians’ defense and scores another touchdown for the Lions. Garza’s successful conversion puts an extra point on the board.

By the third quarter, both teams are locked in a battle for control over the ball. Kicker Trust Carston kicks off the quarter.

The Indians on offense found a gap in the Lions’ defense and were able to run the ball down to the endzone. This would have been a touchdown, but a penalty called on illegal touching invalidated it as well as took away a down.

About halfway through the fourth quarter on Henderson’s offense, a long pass from Jacobe to wide receiver Jamal Robinson brings the team to the 37-yard line. In the next play, Jacobe passes to Tobiaus, and he runs the ball into the endzone with ease. Garza’s extra point conversion is successful.

With less than two minutes in the game, Jacksonville’s quarterback passes to a wide receiver, who seems to slip through Henderson’s fingers and score their first touchdown. The extra point attempt veers off to the side and is no good.

Henderson High School encouraged student fans to dress up in western wear to support the team as they “lassoed” up the Jacksonville Indians. Before the game, Henderson also honored the players in  Rusk County’s youth football league.

This game bumps the Indians’ season record to 0-3, with previous losses to the Crandal Pirates and the Palestine Wildcats. Last season, they went 1-9 overall.

Next week, the Henderson Lions will play their last non-district game against the Spring Hill Panthers at 7:30 p.m. Friday at Longview’s Panther Stadium.

Currently, the Panthers stand at 2-1 (update tonight tho) in the season, winning against Brook Hill last week and White Oak this week but losing against Sabine during week one. Last season, the team went 2-3 in the district and walked off the gridiron as bi-district finalists. Offensively, they executed many “pancake” tackles, which is a type of block that leaves a defensive lineman flat on his back and thus creates an opening for their running back to slip through.