Starting at
$1.00 for 1 day
Get Started
View all rates
You have permission to edit this article.
Edit
Home
News
Sports
Opinion
Obituaries
e-Edition
Classifieds
Local Events
Marketplace
1 of 3 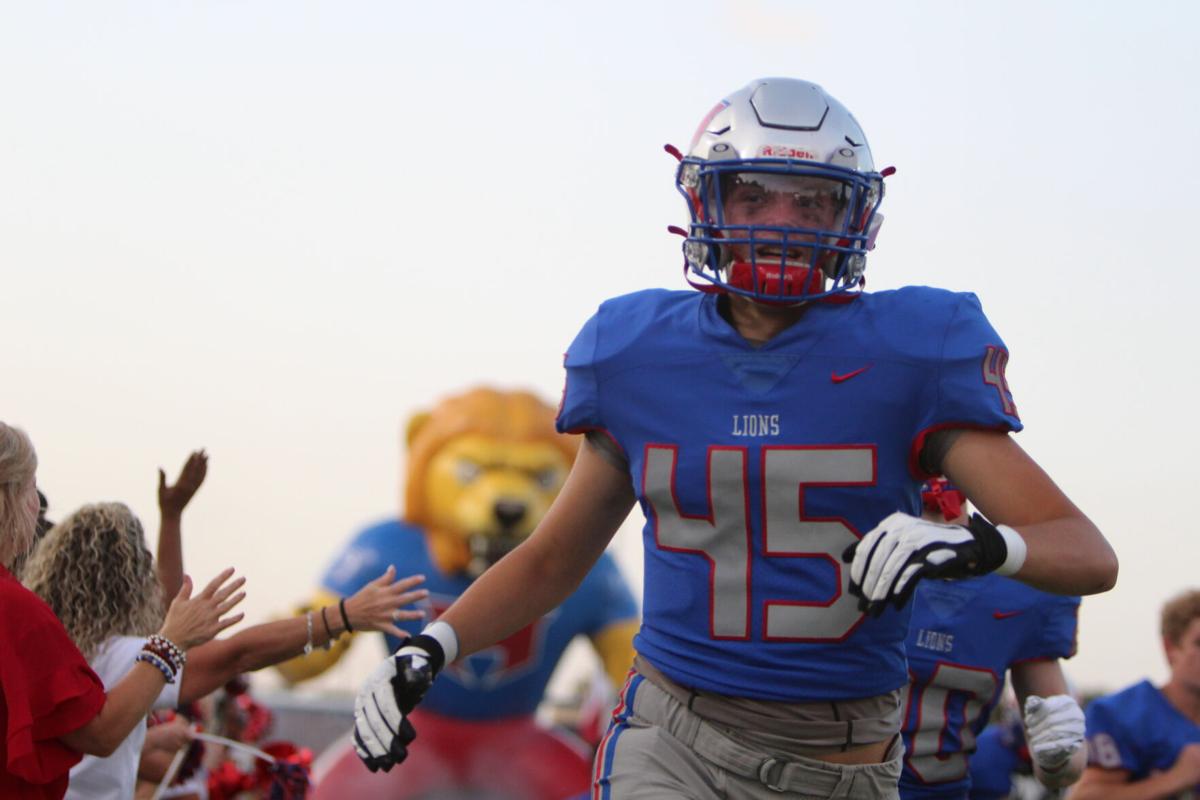 Henderson’s Dequavion Kelly (a wide receiver) high-fives fans and HISD staff members as he runs out of the tunnel with the team before the game starts. 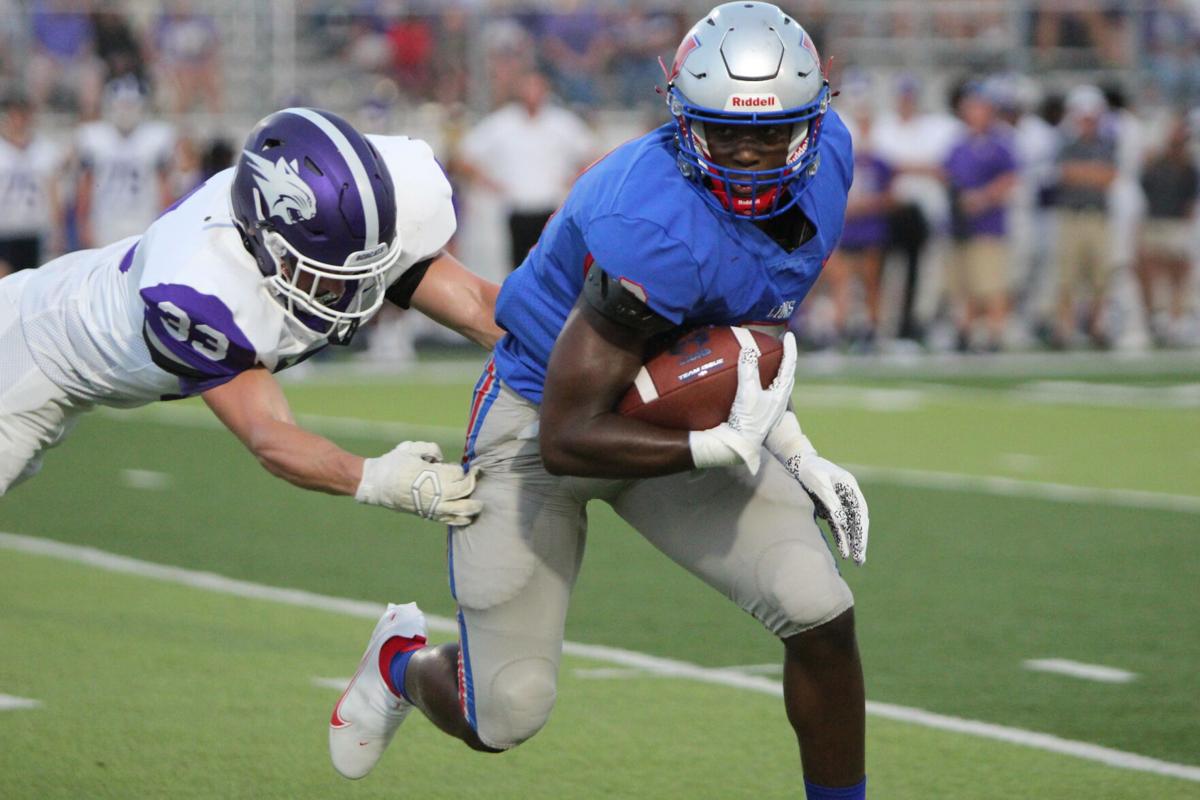 Henderson’s Dallas Alexander (a running back) dodges an attempted tackle from the Hallsville Bobcats as he moves the ball down the field. 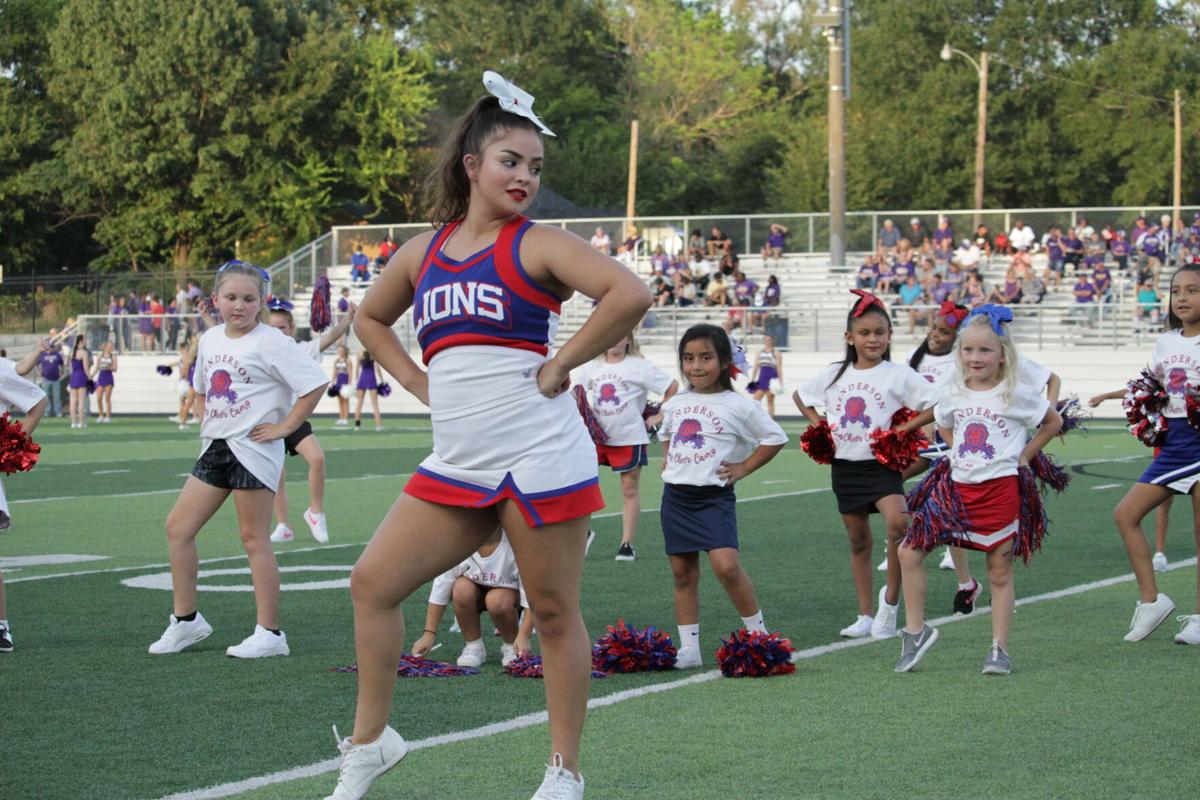 Varsity cheerleader Aleece Schuster leads the mini Lion cheerleaders in a dance that they learned in their Aug. 21 cheer camp.

Henderson’s Dequavion Kelly (a wide receiver) high-fives fans and HISD staff members as he runs out of the tunnel with the team before the game starts.

Henderson’s Dallas Alexander (a running back) dodges an attempted tackle from the Hallsville Bobcats as he moves the ball down the field.

Varsity cheerleader Aleece Schuster leads the mini Lion cheerleaders in a dance that they learned in their Aug. 21 cheer camp.

The Henderson Lions came out victorious in a nail-biting game on Friday night against the Hallsville Bobcats. The final score was 48-47.

A performance from the mini Lion cheerleaders kicked off the game. With the assistance of the varsity cheerleading squad, the mini cheerleaders performed a dance called “Focus” and a fan-favorite chant, Go Bid Red and Blue, to hype up the Henderson crowd. They learned those, along with multiple other cheers and chants, in their cheer camp on Aug. 21.

Another pre-game performance honored the HISD staff since the game was staff night.

During the national anthem, the American flag was flown at half-mast to honor the lives of at least 100 people, including 13 U.S. military members, that were taken in two suicide bombings and shooting at Afghanistan’s Kabul airport. This temporarily interrupted America’s evacuation efforts from Afghanistan.

In the first quarter, the Lions stepped onto the gridiron on defense. Although they put up a decent defensive wall, the Bobcats slipped through the weak points and moved the ball down the field. In the third down, the Bobcats scored a touchdown with a conversion, bringing seven points to the board.

Although the Lions had a rough start with the offensive side of the ball due to a sack to quarterback Jacobe Robinson, running backs Ya’corus Porter and Dallas Alexander proved to be assets in advancing the ball down the field. The Lions also utilized a “fake out” play to confuse the Bobcats into chasing after the wrong player.

The Bobcats soon were back on offense and quickly scored another touchdown. But Garrett blocked their conversion, only adding six points to their score.

The Lions were successful in the kickoff again. However, the Bobcats put up a strong defense. Thanks to a “fake out” play, Jacobe distracted his opponents and darted to the endzone. The Bobcats tackled him, but the ball, still in his hand, made it across the endzone, resulting in Henderson’s first touchdown. A successful conversion added an extra point to the board.

Moving into the second quarter, the Bobcats’ quarterback fumbled the hike and opted to punt the ball. However, the punt was incomplete.

In offense, Jacobe’s complete pass to his brother, wide receiver Jamal Robinson, was valuable in getting the Lions closer to the endzone. Quickly, wide receiver Dashawn Jackson scored a close touchdown similar to Jacobe’s in the first quarter. Another conversion added an extra point to the board for the Lions.

The Bobcats were quick to close the gap when they switched to offense. They outran the Lions and scored a touchdown. Lions’ defensive back Charles Simpson blocked the extra point conversion. At halftime, the Lions were losing 14-19.

Coming back from halftime, the Lions were determined to bounce back in the third quarter, and they did. After success in the kickoff, they quickly scored another touchdown but missed the conversion.

Defensively, the Lions held up a strong wall against the Bobcats. As a result, the Bobcats did not make major advancements toward the endzone.

Switching gears into offense, the Lions scored another touchdown, thanks to Alexander. Kicker Julian Garza delivered a successful conversion. At the end of their offensive run, Jacobe, who is the only quarterback listed on the Lions’ roster, was forced to sit out due to muscle cramps. Jackson substituted as the quarterback until Jacobe recovered. Jacobe was back on the field in the latter part of the fourth quarter.

The Bobcats’ offense came onto the field, and after facing a tough defense from the Lions, running back Elijah Nicholson managed to score a touchdown. The Bobcats opted for a two-point conversion and were successful.

The fourth quarter started with a bang from the Lions. Alexander scored a touchdown, and an extra point conversion boosted the Lions further ahead of the Bobcats.

After a few quick touchdowns from both teams, the Lions were winning by one point with a little less than four minutes left in the game. The Bobcats kept a tight leash on their opponent. With less than a minute left and the score still close, the Lions put their faith in defense to hold on to their win, and with the thunder of fans’ encouragement stomping, they walked away from the gridiron with the first win of the season.

Next Friday at 7:30 p.m., the Lions will face the Gilmer Buckeyes at Gilmer’s Jeff Traylor Stadium.

The Buckeyes won 42-14 against the Gladewater Bears on Thursday. Gladewater ISD welcomed Kilgore College Hall of Famer Phil Castles onto their athletic staff in late April as a defensive coordinator and assistant coach. Castles was also the head football coach for the Henderson Lions until this season.