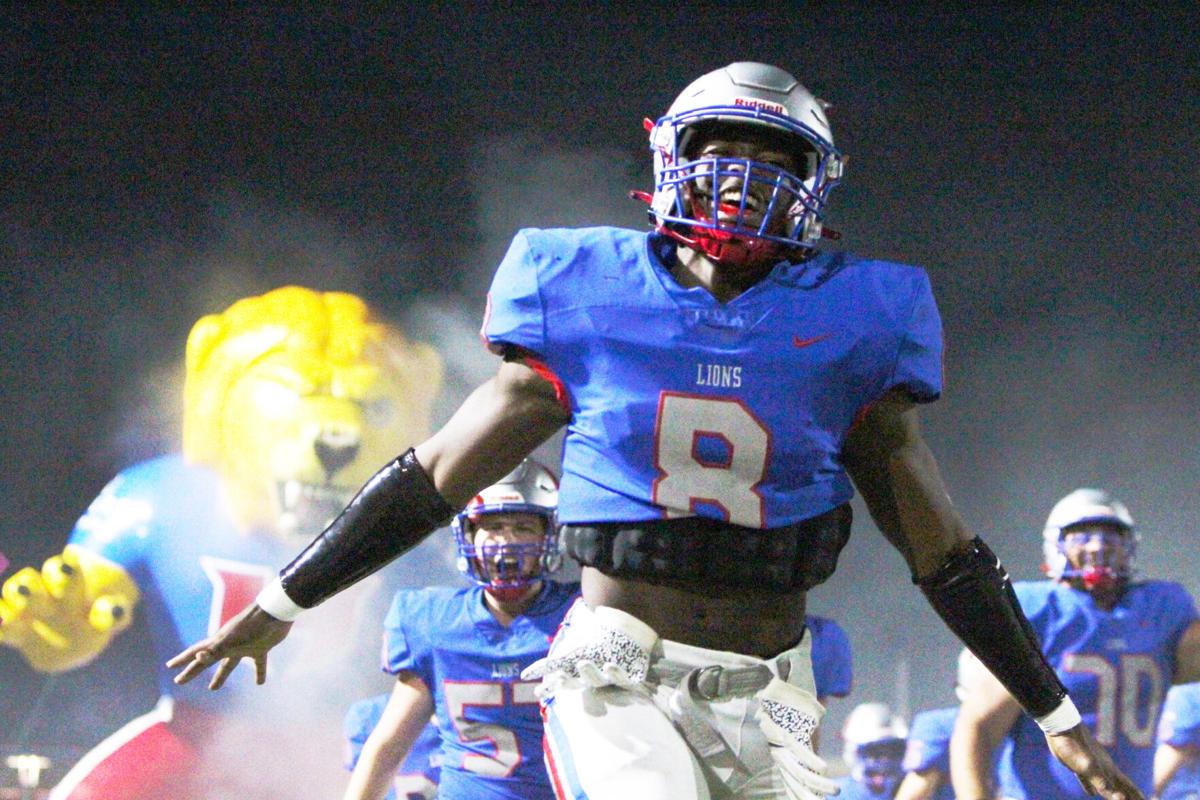 Henderson runningback Dallas Alexander (8) sprints onto the field with his teammates as fans cheer in the stands before Friday night’s district home game against Lindale. 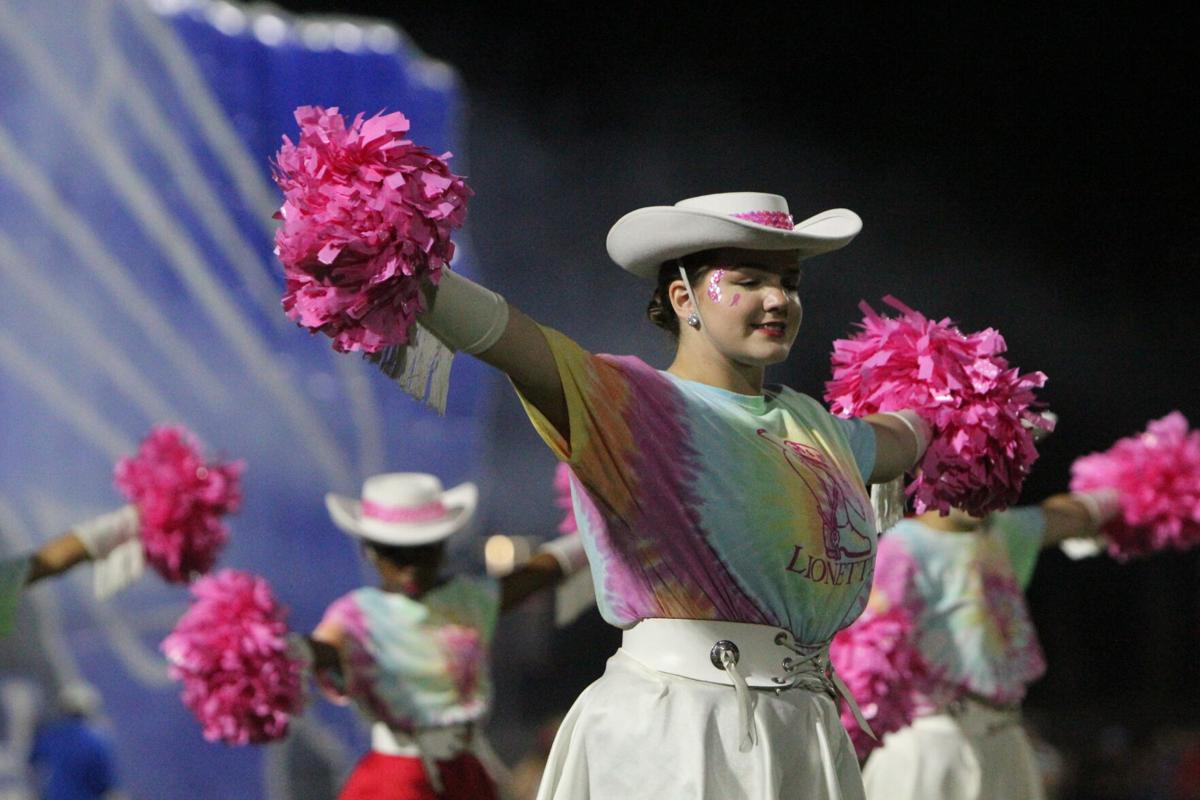 Along with many other student organizations, the Lionettes Drill Team celebrated Breast Cancer Awareness Month by sporting pink hat bands and pom-poms.

Henderson runningback Dallas Alexander (8) sprints onto the field with his teammates as fans cheer in the stands before Friday night’s district home game against Lindale.

Along with many other student organizations, the Lionettes Drill Team celebrated Breast Cancer Awareness Month by sporting pink hat bands and pom-poms.

The stands thundered with roars from the crowd as the Henderson Lions tried to turn the game around in the second half of Friday night’s district home game. However, despite their effort, the Lions still fell short 21-28 against the Lindale Eagles.

The first quarter proved to be challenging for the Lions. The Eagles won the coin toss and elected to receive the ball. They started at the 21-yard line.

With every play, the Eagles inched closer to their endzone. Finally, a long-distance pass from their quarterback broke through the Henderson defense, and their wide receiver flew down the field to score a touchdown. A successful extra point conversion added to the score.

The Lions started offense on the 36-yard line. Yet, the Eagles’ defense formed a wall against the Lions. Quarterback Jacobe Robinson threw a long pass to wide-receiver Jamal Robinson, which would have made a significant advance down the field, but the pass went incomplete. At the fourth down, the Lions were forced to punt, and Lindale received it and brought the ball to the 47-yard line.

Back on the gridiron, the Eagles’ offense did not waste time as they went long for another touchdown pass. Their PAT was good.

During the kickoff, Lions runningback Dallas Alexander brought the ball to the 32-yard line. However, before the Lions could significantly advance down the field, they fumbled the ball. Lindale recovered.

The Eagles crawled forward to the endzone. They attempted many long-distance passes, but they all slipped through players’ hands. Instead, Lindale’s quarterback decided to switch it up and bulldozed his way to score a touchdown. During the PAT, Henderson defensive back Charles Simpson ran around their protective wall in an attempt to spoil it, but he was too late as the PAT was scored with seconds left in the quarter.

Starting the second quarter on the 25-yard line, Lion offensive back Tobaius Jackson brings the ball down the field. Then, Jacobe Robinson throws a pass to Jamal Robinson, but it is fumbled. Henderson recovers. This time, Jacobe Robinson opts to roll out but fumbles the ball again. Henderson offensive lineman Brock Johnson recovers it. At the fourth down, the Lions are forced to punt again, and Lindale receives it, bringing it to around the 25-yard line.

The Eagles still creep down the field. Their quarterback went for a fake-out play, fumbled the ball, recovered, and brought the team inside the red zone. A Lindale player went around Henderson’s wall of defense and scored a touchdown. The PAT was successful.

However, after halftime, Henderson came back onto the gridiron with a vengeance. They received during the kickoff, and Lindale penalties scooted the team closer to the endzone. Jackson slips through and scores the Lions’ first touchdown. Kicker Julian Garza puts another point up on the scoreboard with a PAT.

Offensively, the Lindale Eagles still overpower the Lions. However, Henderson’s defense keeps a tight enough watch on them to prevent them from scoring.

The Lions start the fourth quarter on defense. Lindale slips through Henderson’s cracks. The Lions’ defensive back Daylon Garrett brings them down, but it isn’t enough to prevent a first down. Henderson runs them out of downs, and Lindale attempts a field goal at their fourth down. Alexander rushes in and blocks it.

Despite a minor injury, Jamal Robinson gets ahold of the ball and breaks out ahead for a touchdown run. Garza’s PAT is good.

With less than a minute left on the clock, Lindale opts to run out the clock to seal their victory.

This game was also Pink Out night. Fans and students were encouraged to wear pink to show support for Breast Cancer Awareness Month.

Last season, the Lindale Eagles went undefeated in the district and advanced to state finals against 4A superpower Argyle. Argyle walked off the gridiron last year as 4A state champions.

Next week, the Lions will travel to Palestine to take on the Wildcats at 7:30 p.m. Friday. The Wildcats are 1-3 in their district record this season, with losses against Kilgore and Mabank and a tight win against Chapel Hill. Last season, Palestine was a bi-district finalist with a 4-2 record in the district and fell short in their first round of the playoffs.