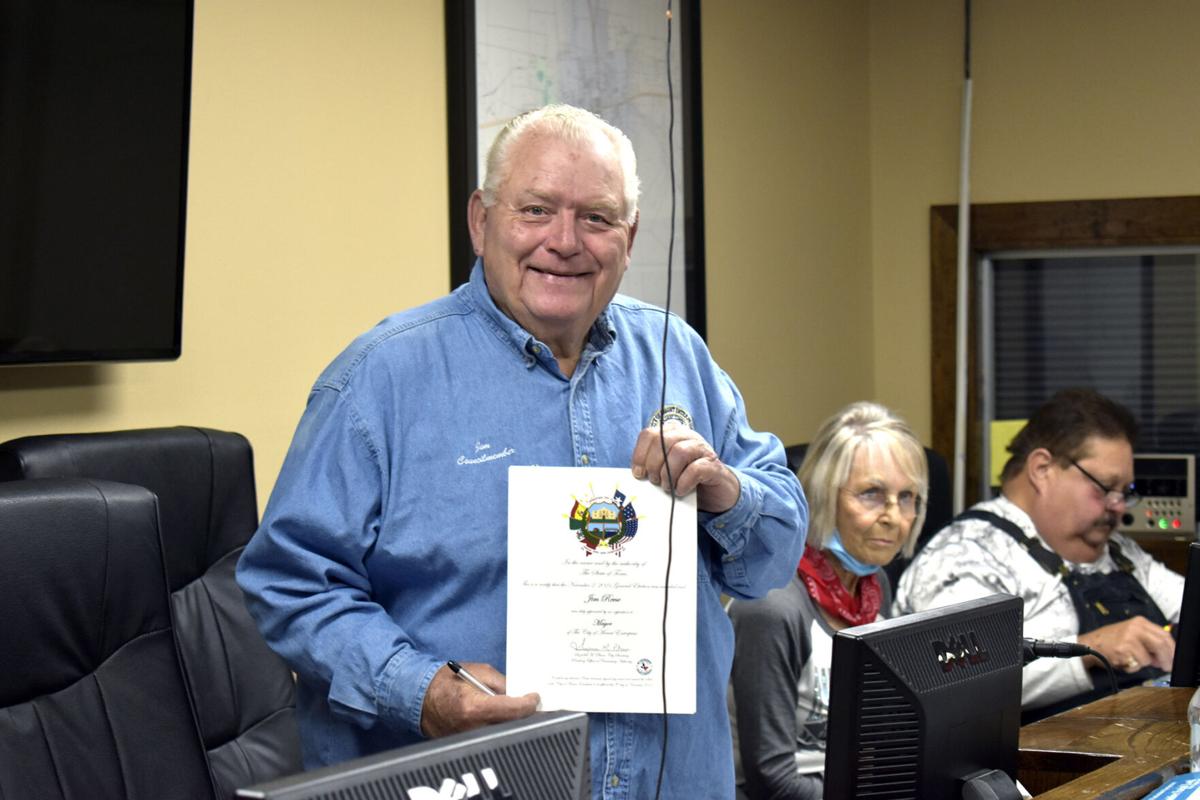 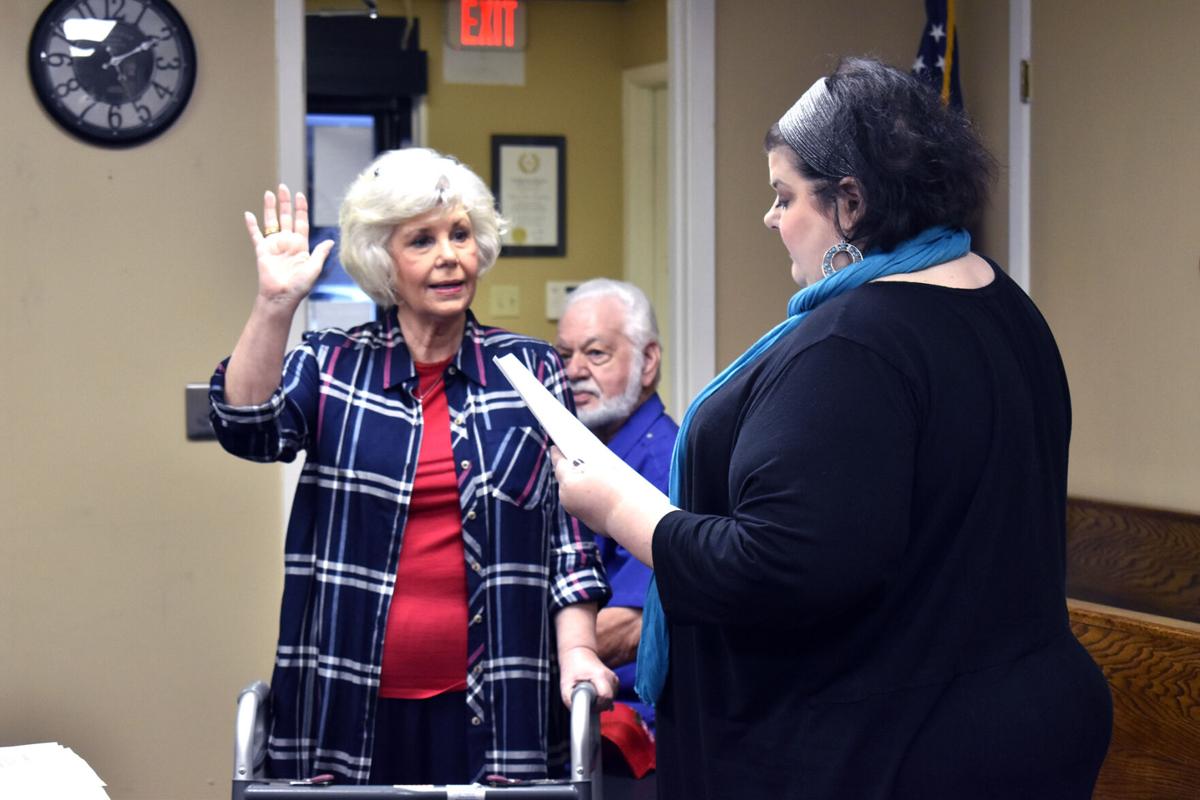 Mt. Enterprise City Council converged Tuesday night in an earlier than usual meeting to swear in the city’s new mayor and judge.

“I would like to say thank you to each one of you for giving me the chance to work with you,” said Judge Walters, addressing the council with gratitude for her recent appointment.

During the visitors and citizens presentation, Colby Smith of Hazel Technology Services, website creator and IT guru recently commissioned by the city took a moment to thank city officials for supporting his small business and trusting him to the important task of creating the city’s .gov website.

“About six months ago I came to you guys, I’d just started my business and I was taking on new customers and I approached you guys about taking you on as a new customer. Over the summer you guys came on as one of my customers and a lot of good things have come out of our relationship together,” said Smith. “Thank you so much for being a customer and for letting me be your provider for your needs. As a small business, it really means a lot to me that you guys are helping support me.”

Doing his part to pay forward the support he’s received as a small business owner and to recognize the sacrifices made by our veteran population, Smith will be waiving any labor fees for veterans and active duty service members for the month of November.

“I wanted to let you guys know that’s part of what you’re supporting when you’re one of my customers.”

The council moved on to approve the usual list of monthly reports and meeting minutes in the Consent Agenda.

Moving on to action items, the council unanimously agreed to place the city’s two allotted votes toward the Rusk County Appraisal District’s 2022-2023 Board of Directors in support of Nesha Partin, the county’s Tax Assessor-Collector.

After a short discussion and explanation of the Texas Opioid Abatement Fund, the council voted for the approval of Resolution 2021-1109-B which supported the adoption and approval of the settlement allocation term sheet which will likely see the city receive a small portion of the funds recovered in the Opioid lawsuit. Initial monies granted could fall within the $1200 range with the possibility of future sums.

The debt ceiling has existed since 1917. Here's how it's impacted government spending ever since

Mt. Enterprise City Marshal should gain the use of some new equipment with council approval to purchase a new protective vest and stop stick. City officials have reached out to the Dickey Foundation who just last year donated thousands of dollars worth of Kevlar vests to the Rusk County Sheriffs Office. The council also discussed, as part of the equipment update requested, a camera system dedicated to the intersection of Highway 259 and Highway 84 to aid in the prosecution of traffic cases and any future traffic accidents at the increasingly dangerous intersection. No final decisions were made regarding the camera system as Randolph and Pharr search for the most equitable options.

The council motioned to give the City Marshal security access to the city’s safety deposit box and to remove former mayor Brandon Jones from the approved list of check signers for the city.

With the interlocal agreement with Henderson Police Department in full effect, HPD K-9 Officer Kevin Bisnette is on full-time duty patrolling the highways through Mt. Enterprise. Grateful for his assistance and conscious of the time he will be spending in his patrol car, Marshal Randolph requested that Officer Bisnette be given access to a city key fob and access code that he may utilize restroom and cooking capabilities within City Hall. The council moved to table the discussion until further options could be identified, such as the possible use of the TxDPS satellite office at the Community Center building.

The council expressed their appreciation of Officer Bisnette’s assistance and agreed to discuss the matter further to come up with a suitable and safe alternative.

Mayor Reese took a moment during the councilmember comments portion of the agenda to communicate his excitement at being the city’s mayor and his intention to be the best city leader he knows to be.

“I just want to thank you guys,” said Reese. “I look forward to working with each and every one of you. I love it that we have a working relationship that is really good, and I want to keep it that way.”

City Attorney Allison Biggs wrapped up the meeting’s business with an update regarding the ongoing correspondence surrounding the city’s decision to reduce the salary of former Municipal Court Judge Rand Cates and his subsequent resignation. According to Biggs, Cates’ responses to registered letters sent by the city cited government codes that suggested wrongdoing on their part. These responses eventually became correspondence with an attorney retained by Cates to dispute the city’s actions.

“I got a letter from David Griffith on September 13 explaining that we were wrong and that I needed to look at the local government code,” said Biggs. She enlisted the help of an outside source to get a better understanding of the municipal law in question and drew the conclusion that the city was justified in their prior actions on the technicality that Judge Cates didn’t hold the specific title of Municipal Officer and therefore the policy didn’t apply in the situation. She responded with a certified letter sent on October 5, 2021, which explained the city’s interpretation of the policy in defense of the action taken.

“I have not heard anything back. I’m hoping that the issue is done. I still feel confident that we were correct in what we did,” Biggs said.