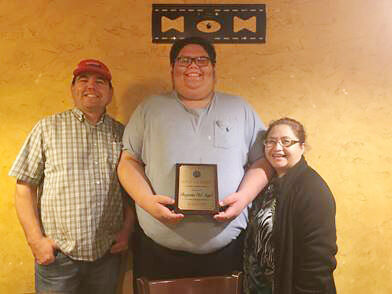 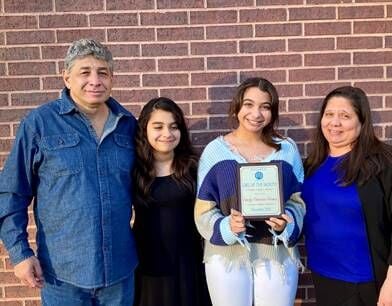 Henderson’s Optimist Club has chosen Emely Vanessa Gomez, daughter of Marin Gomez and Veronica Quintanilla, and Benjamin DelAngel, son of Francisco and Ana DelAngel, as December’s Boy and Girl of the Month.

Girl of the Month honoree, Emely Gomez, has been a Key Club member since her Sophomore year and a member of the National Honor Society since her Junior year. She also became a class officer for her Senior class.

She is proudest of the fact that she has powered through a multitude of the offered advanced classes.

Her favorite class has been math at which she has excelled under the patient tutelage of teacher Ronny Grandgeorge.

Gomez has been a member of the Varsity Tennis team for most of her high school career and believes that her participation in sports has opened her to new friendships. In the time she’s spent with Key Club and NHS she has been given the opportunity to serve her community and develop leadership skills that will benefit her throughout her life.

Gomez is a member of Tabernaculo de Gracia y Restauracion in Kilgore where she is a worship leader. Her involvement with the church and its youth group and worship team has enforced her discipline and leadership skills.

Upon graduation, Gomez plans to attend Liberty University with a major in digital marketing and advertising.

To her parents, Gomez is thankful for their constant support. She’s eternally grateful for all of the moments shared, great advice given, and the love shown to her and her sister.

Boy of the Month award recipient, Benjamin DelAngel, or Big Ben to those closest to him, is a long-time member of the HISD Football program. DelAngel had the opportunity to participate in playoff games for the first three years of his high school career. It was in these moments that he developed his fondest high school memories.

He also participated in solo and ensemble contests and was given the chance to go to New York and sing at Carnegie Hall.

He plans to attend East Texas Baptist University upon graduation.

DelAngel hopes to express his profound love to his parents and gratitude for always supporting him.